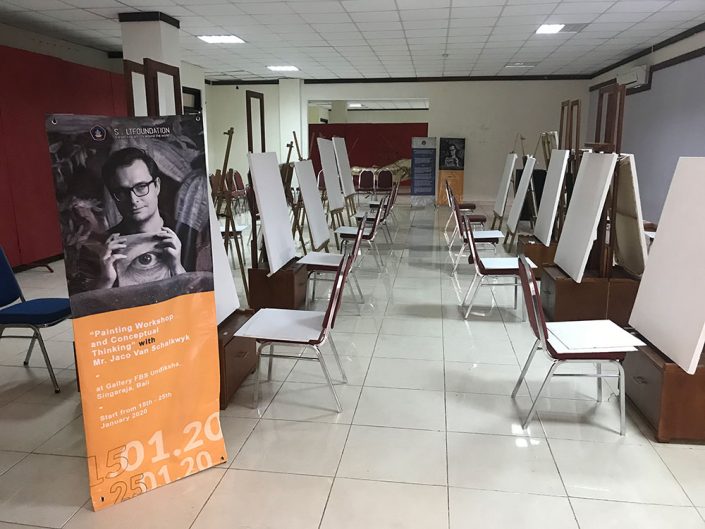 Arium is a suffix that denotes a place where things are kept, like terrarium or aquarium, and this exhibition is exactly that – a contemporary ‘wunderkammer’, a curiosity cabinet and a visual feast of unusually juxtaposed exotica;  interspersed with mundane familiar objects which become reimagined as ‘other’ due to the artist’s manipulations.

Jaco van Schalkwyk’s prodigious visual collection follows a long history of artists as collectors of ancient or novel curios which serve as inspiration for their own art works.  Think of Pablo Picasso and Andre Breton’s collections of African or other exotic artworks for example, or Degas and Monet who collected Japanese prints to directly inform their art.  Others, as visually inspired practitioners, were just intrigued by unusual objects.  Rembrandt, for example, spent all his money on a vast collection of exotic shells, corals and animal specimens, which he sadly had to sell in 1656 to avoid bankruptcy.   More recently we find examples like the British artist, Damien Hirst, who owns many human and animal skulls, examples of taxidermy and anatomical models.  Then there is the arch collector Andy Warhol, who amassed an eclectic hoard of (unsurprisingly) ephemera and kitsch that filled his house to capacity.

Jaco is no less interested in curios, exotica, ephemera and kitsch but unlike these predecessors his collections are mostly made using the camera on his mobile phone which has over the years become his portable curiosity cabinet.  You will see around you some physical objects that he has encountered and collected on his travels, or browsing in junk shops, but most of these are incorporated with imagery that is painted in a realist style, tricking the eye into believing the images are depicting reality whereas in fact what you are seeing in each image is a construct:  a careful placement of different places, people or items that might not normally be found together.

The underlying thread that gives this eclecticism some coherence is the notion of the photograph as an object.  Jaco says he wanted to create a ‘still life’ exhibition.  To this end the photographs themselves are the still-life objects which he paints, rather than the items captured in the images.  Clues to this approach can be seen in the edges of a photograph set into another scene, or the shadows and reflections that might appear on the surface of a photograph (rather than the scene being depicted), or shadows falling onto the photograph when it has been placed next to other items or images.  This is particularly evident in Pteridomania where Jaco took a photograph on his mobile phone of a natural forest scene in Vietnam, then took the printed photograph into his own garden and photographed it again in situ.  By doing this he identifies how the ‘exotic’ is so often assimilated and normalized in our lives.  Johannesburg suburban gardens in particular are often recreations of ‘exotic locations’ as they include rain forest vegetation, ferns or palm trees that are alien to the indigenous Highveld landscape.  The subject matter in the first image now has real plants, very similar to the forest vegetation depicted, which surround and overlap the photograph and cast shadows onto it.  These shadows are recorded in the second photo which then provides the reference for the painting. A trompe l’oeil effect can be discerned in the obvious fabrication of these images.  Trompe l’oeil, meaning to trick the eye, is not about attempting to mislead the viewer into accepting the ‘reality’ of these images but is instead revealing the trickery involved in the production of each simulation. Ultimately the painting is a record of a constructed reality where the manipulations are visible to the viewer.

Many of the works in this exhibition include imagery or objects that might be identified as ‘exotic’ and which raise questions about the problematic nature of consuming and displaying another culture, about the power dynamics in appropriating the ‘other’ and the power of the gaze.  Jaco has always been aware of the difficulties of being an outsider as he grew up in a secluded religious community and was subjected to bullying and alienation when he first went outside the community to school.  He was also made very aware of the exotic ‘other’ when he accompanied me and my co-curators to Beijing in 2015, as his work was included in our selection for the South African exhibition at the Beijing Biennale. That trip became his introduction to Eastern cultures and the notion of ‘the exotic other’ – but it was not only the obvious difference of culture and artifact in China that raised his awareness of otherness.

One of our curatorial team, Shonisani, became an object of wonder to the Chinese in Beijing.  Wherever we went there was a small entourage of fascinated observers following us and trying to get close enough to touch her black skin or the long braids of her hair.  The boldest even asked to have their photographs taken with her.  When newspaper photographers were sent to document our exhibition for the press they quickly forgot their official duties and spent time photographing Shoni, asking her to pose in front of the artworks and to turn her head so her braids were visible (much to her irritation).  For Jaco this was a pertinent reminder of his own othering as a child.

In an attempt to remain sensitive to discourses around exploitation of otherness and the power of the gaze, therefore, Jaco’s strategy to level the playing field (so to speak) has been to insert some evidence of himself as the object of the gaze into many of the works. Sometimes he is there as a reflection or shadow barely discerned, sometimes he is the obvious focus of the gaze as seen in his self-portrait with a double frame, sometimes he comments on the power of the gaze by including his disembodied eye looking back at the viewer and questioning who is gazing at whom.

As viewers we are also complicit in the power of the gaze but our participation is complicated in many of the works that include mirrors or glass surfaces, where our reflection becomes part of the image and we look back at ourselves through the framework of another culture.  An example of this can be seen in the small jewellery box, containing a painting of Barong (a Balinese god) that can only be viewed as a reflection in a mirror that has been inserted inside the lid.  When we look inside, both viewer and painting are visible in the mirror simultaneously.  There is sense of active voyeurism in this and other boxed works into which one must peep.  These works reference the voyeurism of the world traveller who is looking into other cultures, taking photographs of their environments, their homes, or their temples.  The photographs of these encounters become trophies to bring home and the camera, or these days the mobile phone, becomes our portable Wunderkammer in which these trophies are displayed for viewing.

Like many curiosity cabinets the objects to be viewed appear eclectic and this too is mirrored in the exhibition where there is no attempt to retain cultural exclusivity.  The jewellery box is a fairly common object from China, the painting inside is from Bali, then you include the polyglot of viewers…  These overlapping cultures exist throughout the exhibition as paintings of Myanmar scenes are framed in carved wood from Bali, or a sculpture reflecting African mythical beliefs by Credo Mutwa, is reproduced as a painting within a box from the old Republic of South Africa.  The conversations set up between different cultures and different historic periods are as interesting and thought provoking as the visual conversations set up by Jaco’s encyclopaedic juxtaposition of landscapes, people, artefacts, curios, arbitrary objects and furniture.

There are many layers of alteration, de-contextualization and re-contextualization in this exhibition which add to these conversations.  The objects were originally three dimensional, then they are photographs, then the photographs are printed and manipulated as objects, then photographed again as the source material for works.  The painted images are then inserted into or combined with found objects and again become three dimensional.  A continuum is thus created that is perpetuated by you as visitors to the exhibition who might take further photographs and display them elsewhere on your mobile phones.  The corollary to this is that an exhibition like –Arium invites all of us not only to look, but to actively participate because, as Patricia Davison (2004:14) explains with reference to curiosity collections: “The enchantment of the object…lies in its physical presence and its promise of revelation.  But the unknown is revealed only through human engagement and interpretation – ideas and artefacts are inseparable.”

I am sure you will all enjoy contemplating the imaginative minutiae found in this contemporary curiosity cabinet as much as I have, and I would like to conclude by congratulating Jaco on an intellectually challenging, fascinating and thought provoking exhibition.  But beyond the conceptual rigour of his creations these are also beautifully crafted artworks, exhibiting the meticulous finish we have come to expect from Jaco’s work and evoking the precious nature of collectable treasures.  Well done Jaco and I am honoured that you asked me to open your wonderful exhibition.